During 1999 Bourne Wood was planted in preparation for the Millennium. About eighty village children chose a tree from a list of fifteen types of small trees and shrubs found locally. Sixty five of the children planted their own tree. In addition a further one hundred  trees were sponsored by residents for grand children living outside the village. All the trees thrived initially but it was realised that the small area available would mean that eventually some trees would dominate at the expense of others. Over the years I have resisted suggestions that some thinning should be carried out and have let nature take its course. However now that some of the trees that have been crowded out are quite tall and thus a hazard I have agreed to some thinning.

Woodborough Scouts overseen by Robert Janes and David Singleton have had a two day tidy up in pursuit of their Forestry Badges. Dead and dying trees and shrubs have been removed as have most of the now redundant tree mats and guards. Small low branches have been removed and the Wood now has a much more open feel to it. The cut material has been used to create a “dead hedge” along the southern boundary.

It is hoped that the strip between the Wood and the playing field along with the rest of the western boundary  will now be improved by removing rubbish, stopping the dumping of grass mowings and clearing the drainage ditch along this boundary. This will help to eliminate the flooding problem of this side of the playing field and the Wood, and will make available some space to plant some more small trees. These will be replacements for those trees and shrubs that have died that were planted by village children.  In the original planting each tree had an owner and I am in the process of identifying the village children owners of the lost trees.

If you lived in Epperstone as an under eighteen year old in 1999 you would have had a tree planted so if you would like to help with the renewal of the wood I will be pleased to hear from you.

Bourne Wood, in the corner of Epperstone playing field, was originally called the Children’s Millennium Wood and planted to celebrate the 2000 millennium year. One hundred small growing native trees and shrubs were planted for the village children plus some additional sponsored trees.

All grew well for the first few years but eventually the taller growing species have shaded out the smaller. So an additional strip adjacent to the existing planting has been cleared and ten each of seven smaller species replaced. 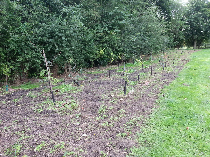 These photographs were taken at the end of August 2015. 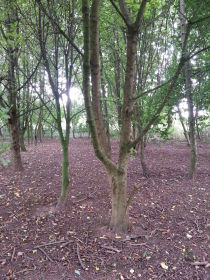 A lot of work has gone into extending the wood. It is definitely worth a look.